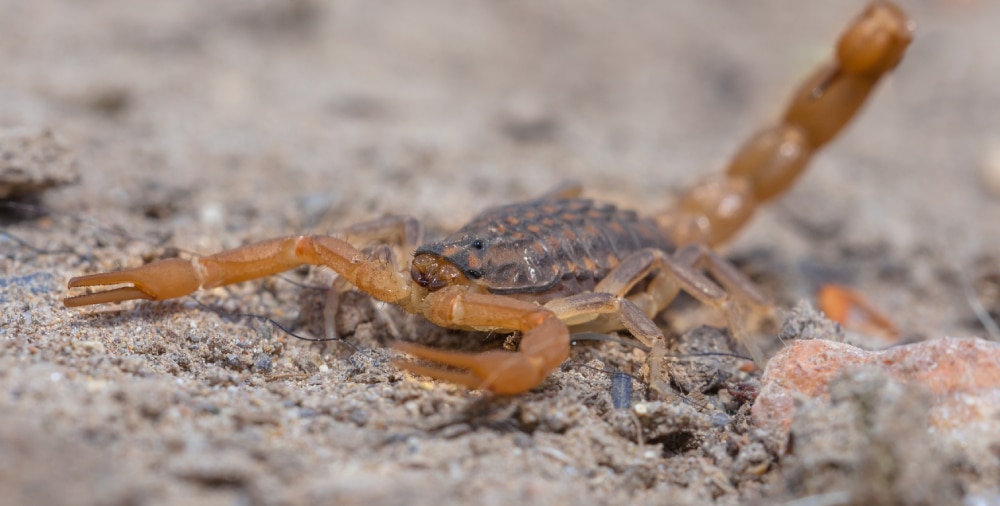 Scorpions in Arizona: 3 Things To Know

Spring is around the corner for hot, dry, and sunny Arizona. That inevitably means more pests roaming the desert and trying to invade your home. One of the most common Arizona pests are scorpions. In fact, according to DesertUSA, Arizona has one of the highest concentrations of scorpions in the United States.

When dealing with scorpions, it’s best to assume that they are poisonous and stay away. This mindset will keep you safe because even though only two U.S. scorpion species are poisonous, all scorpions can still harm you with their sting. Luckily, most scorpion stings aren’t significantly harmful but will only cause pain where someone was stung. Yet, other scorpions can cause numbness, breathing trouble, difficult swallowing, blurry vision, and more. If you’re stung, it’s smart to get medical attention right away.

Needless to say, scorpions are a menace to those around them. Especially if they invade your home, you can have a real problem on your hands. You’ll want trustworthy and experienced pest control services like Urban Desert Pest Control. We can quickly handle scorpion and other pest infestations to restore safety and happiness to your home.

In this article, the Urban Desert Pest Control team will offer three things that every Arizona resident should know about Arizona scorpions. The more you know about the pests roaming around, the better protected you can keep your home.

In its desert climate, Arizona is home to a few prominent scorpions. It’s smart to know which ones you can expect to find trying to infiltrate your house.

Arizona bark scorpion. This scorpion is a popular one in The Grand Canyon State because it’s one of the more venomous scorpions found in Arizona. You can distinguish it with its yellowish-tan color and long metasomas (the stinger tail). They’re found around tree bark and reported to be a common home-invading pest.

Similar to most pests, scorpions are nocturnal and hunt at night. This means they are more active at night, so that’s likely when they would enter a home. Scorpions enjoy the shade during the day and want this with their shelter. When indoors, they’ll remain in cool, dark areas, such as a basement or attic. Also, scorpions enjoy cluttered areas, including stacks of boxes or clothes.

Signs of a Scorpion Infestation

Contact us for a free quote or inspection to keep you, your family, and your home safe.