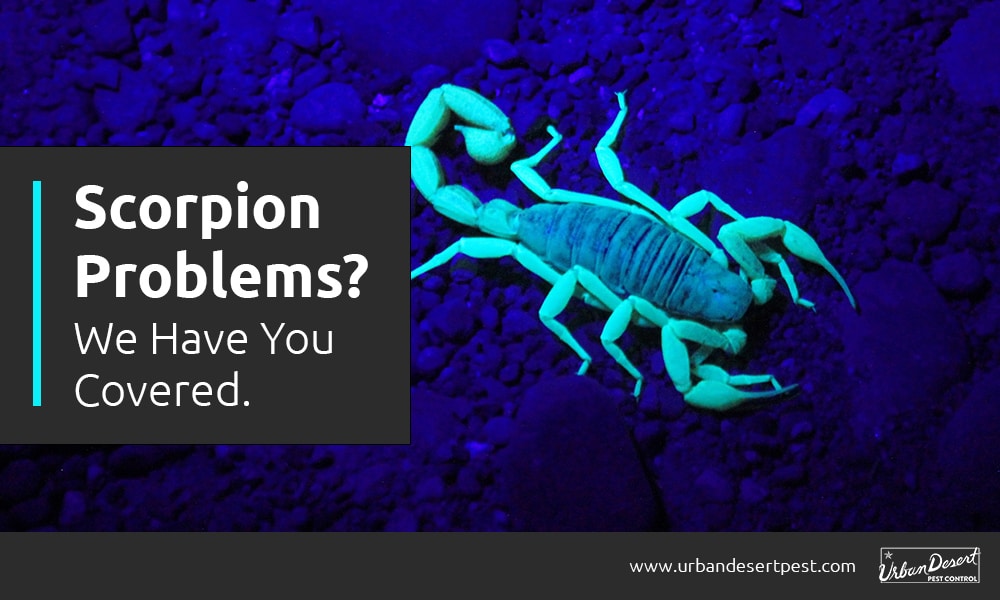 Scorpion Problems? We Have You Covered.

There are dozens of Arizona pests that find their way into your home each year, but of all the revolting little creatures, there’s one that really stands out, the Arizona Bark Scorpion. He’s the creepiest, the most dangerous, and the most inconspicuous of the bunch. He’s also one of the most challenging pests to eliminate.

The Bark Scorpion’s yellowish-brown appearance makes it easy for him to stealth his way across tan-colored carpet and tile (common Arizona shades). They also enjoy sneaking up walls and dangling from ceilings—occasionally dropping onto beds, sofas, and other random nooks of your home. While they’re smaller and less intimidating than, say the Emperor Scorpion, they pack a much more venomous punch that results in stinging, numbness, nausea, and even vomiting.

Do you have a scorpion problem? We’re sorry to hear that. We can help. Schedule an appointment today.

If you’ve seen one, you can be sure you’ll see another. Not only do Bark Scorpions travel in packs, but the females can give birth to over 20 offspring! It doesn’t take long for a Phoenix home to become infested with scorpions—especially when the scorpions have a steady supply of roaches, crickets, spiders, and other small insects.

“Nearly 80% of Bark Scorpions can be found in the cracks of Arizona block fences.”

First, we use the very best, top-of-the-line insecticide, Demand CS. It’s pricey but well worth the investment. It’s micro-encapsulated and continues to kill scorpions for weeks after we treat your home or property. Our *technicians are also trained and certified, because let’s face it, what good is a tool if you don’t know how to use it?

Next, we create a double layer of protection on the exterior of your home or property using a power sprayer with 350 feet of hose. No matter the size of lot you live on, we’ll be sure to spray all the necessary areas that scorpions like to hide, creep, and grovel. NOTE: Nearly 80% of Bark Scorpions can be found in the cracks of Arizona block fences.

Additionally, we offer a scorpion seal-out service. The little boogers can enter your home through cracks the width of a credit card, so (for an additional service fee) we seal up every possible entry point on the interior and exterior of your home.

Finally, we offer a black light service, where (for an additional fee) we use a flushing agent that agitates the scorpions—forcing them out of hiding. When darkness sets, we do a thorough scan of your home with a black light and remove any scorpions we find.

Your family’s safety is our main priority, so we don’t mind going the extra mile to keep scorpions out and away from the ones you love.

We treat your entire home perimeter, specifically the J-trim that covers the gap at the base of your home foundation that allows stucco walls to breath. This gap creates a nice little shelter for scorpions to reside during the day.

The Arizona Bark Scorpion is a warrior. He can go up to a year without food. He’s also a cannibal. He won’t hesitate to eat one of his buddies if he gets hungry enough. They can live up to six years, returning season after season, hanging around your baseboards, walls, and ceilings.

When it comes to scorpions, we recommend scheduling a second treatment within 30 days of the initial treatment. Once the scorpions are under control, we suggest moving to a bi-month (every 60 days) service plan.

We can be playful, but on a sober note, the Arizona Bark Scorpion is no laughing matter. He’s sly, he’s relentless, and he’s sting-happy. We’ve heard countless stories of people being stung by scorpions in their homes. According to Kang and Brooks (2017), Phoenix has the highest number of scorpion stings per 100,000 people (up to 677). This number doesn’t include pets, which aren’t immune from stings. If you don’t choose Urban Desert Pest Control, please choose someone to treat your home before it’s too late.